Having gained a bit of a reputation as a ‘last minute blogger’ I thought I’d give writing a post ‘on the fly’ during a game a go.

So, here it is, written on my old phone from behind the goal at Hillsborough. 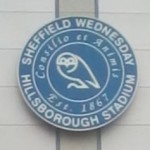 So, here we are at Hillsborough, just about forty minutes to kick off and we’ve just come out for a warm up.

Not a bad journey up, non-stop from Colchester in just about three and a half hours and no near misses as we passed Grantham – you should see the post after the Rotherham match for an explanation of that one !

Although Wednesday were going to allow cash on the gate I rung up the Charlton ticket office on Monday afternoon and ordered a couple of tickets.

Helpfully, these hadn’t arrived by Thursday and so I rung the ticket office again only to get an answer phone message telling me it was shut.

Brilliant, thanks Katrien you fool !

But not to worry, there was still Friday.

A dip out of work late morning gave me a chance to get home and check the post but still no tickets.

Another call to the ticket office which this time was open and the assurance that reprints would be available to collect at the gate.

And indeed they were, courtesy of a very helpful Wednesday employee.

Thoughts turned away from Charlton for a brief moment as we crossed the footbridge away from the stadium to find the memorial to the 96. 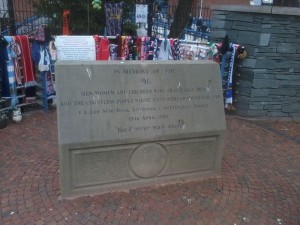 A humbling thought that they went to a football match and never came home.

A good time to text my wife I think.

A very polite young lady then forced a bread-rolled peperami upon us which had to be the driest thing I have ever tasted.  (Who puts a peperami in bread anyway ?)

A further walk round to the turnstiles was shared with the official twitter feed slightly spoiling the day by releasing the team news with three strikers on the bench and Reza starting.

I assume we’re aiming to keep things tight for an hour and then bring on a striker or two to try and nick it.

My immediate worry is that neither Reza or Callum can retain possession so a lot more pressure on the back line.

More of a worry is the missing Jordan Cousins through injury, typically after such a good performance on Sunday.  Definitely time for Ba to step up.

Fifteen or so to go ….. time for a quick read of the prog.

So, now I’m thinking back to the Charlton Live pre-match preview and not a lot of what was predicted is happening.  No Big Mak, who I assume is fit, but nothing created so far.

Half time and its nil – nil.

Best chance of the half was a free kick to both sides, JBG hit the walk with ours, so no change there, theirs was too high and curled over.

The back four are doing okay but Reza is struggling to stay upright in this thin northern air!

Fulham and Rotherham are both winning which isn’t good, but MK Dons are drawing noo-noo too.

Good pie and a bovril – second half – come on !

And we’ve conceded from another corner – bloody hell.

Need a change and quickly.

A big header comes back off the post and Forestieri with a diving header finishes us off.  This could be three or four !

Well, definitely three – shot going just wide – Ba sticks out a foot and deflects it inside the post !

Jacko on for Ba – too late now though, and now Lookman for Diarra !

Game over, three – nil, a long drive home, made only slightly better by my local mob Colchester letting in two in the last two minutes to lose 1-2 at Walsall.  They are as much of a basket-case as we are !!

It’s now Sunday night, youngest daughter’s 16th birthday and we’ve had a day at Westfield shopping and then Pizza Hut for tea.

I haven’t listened to the Sunday night Charlton Live yet (will do that tomorrow probably)  but looking back at yesterday ….

It promised much having taken seven points from the last three games but delivered bugger all except despondence and frustration.

Two of that starting eleven have made it on to my ‘never pick them again’ list.

Actually, that’s a bit of a lie because Reza was already on it, but after yesterday I have done quite a bit of heavy underlining !!

Apparently, according to Jose, Lookman and Igor weren’t fit enough to chance so, instead of chucking them on at half time or even starting them and subbing them off if they felt a twinge, we bizarrely wait until we’re losing and the game is gone and then put them on !!

Unfortunately, it appears the English game, especially at Championship level doesn’t suit Ghoochannejhad at all.  He is too lightweight and despite some nifty ball juggling before the kickoff, can’t trap a ball and hold it.

Although, according to Jose again, he was very good against Sheff Wed last time out … November !!

The other one for my list (at a risk of getting grief from some quarters) is JBG.  Yes, I know he’s a very good player (on his day), but his day clearly doesn’t coincide with the same day as we have a game frequently enough.

An international footballer who can’t deliver a corner kick or free kick into the box with enough regularity drives me mental.  When he has done (Jacko & Teixeira) we have scored but to hit the first man from corners and the wall from free kicks as often as he does is disgraceful.

He just doesn’t create enough / anything and as our main creative player that leaves us struggling.

When an attack broke down, Wednesday pushed forward and JBG ambled back to halfway in time to watch us concede a corner at which point he broke into a jog to take his place on the edge of our box.  The chap behind me summed it up in a long selection of generally unprintable words.

Sorry JBG, but you seem to have lost what little heart you had for this struggle and my faith in you with it, good luck at the Euro’s ….. on your bike !

With Rotherham (new manager, Katrien, who has Championship experience, Katrien and has got them four wins and a draw I think) and Bristol City both winning we are right back in the proverbial u-bend, just waiting for the final flush to send us down.

Any hope now ?  Probably not.  A point or better at Hillsborough and we’d have kept the pressure on, but six points plus another for the goal difference I think is now beyond us.

On a brighter note, congratulations to the lads in the Kent Senior Cup, making it to the final again this year, although as Louis Mendez rightly pointed out in Thursday’s preview show, Roly & the Marionette probably think all’s well for next season because we’ve got a team full of cup winning youths to bring into the first team !!

Deluded is the word that comes to mind.

No game for a bit (thank God) until Birmingham on the 2nd April.